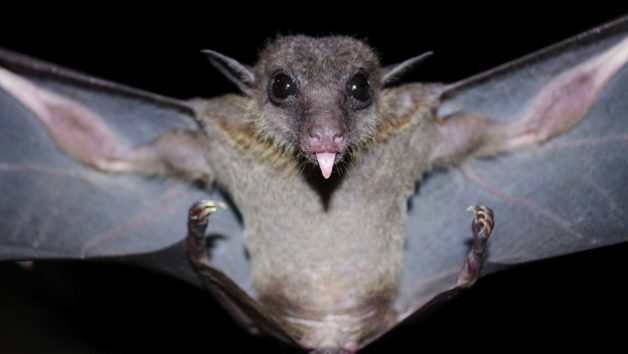 With Halloween around the corner, the specter of ghosts, ghouls, and zombies might seem to be lurking around every corner, too. But let’s get real: The odds that you’ll set foot in a real haunted house are slim. Disappointed that you’re missing out on some scares? Not to worry! Even if killer clowns or poltergeists don’t inhabit your home, there are plenty of real-life intruders that could be hiding under your roof—unwanted visitors that would give you the heebie-jeebies if you knew they were there. Here’s a rundown of six nerve-racking unwanted visitors, and how to get rid of them.

These flying rodents are not only the stuff of Halloween nightmares—they’re also dangerous. They can also transmit a host of diseases, from histoplasma capsulatum, a fungus that causes lung disease, to Ebola. Bats can sneak into your home through even a quarter-inch-sized hole. And now that the weather’s getting cooler, they’re actively looking for cozy new digs.

Your best scare tactic: If you hear the chilling squeal of bats in your attic, you must first determine how they are getting into your home. Look for brown or black stains (a telltale oil deposit from their fur) around suspected entry points near your roof. Once you’ve found their way in, you can install bat cones, which are like small, slippery funnels. “These allow the bat to fly out of your house, just not come back in,” says Ron Harrison, PhD, an entomologist for Orkin, which offers pest-control services around the world.

Back in the Middle Ages, these rodents were responsible for carrying bubonic plague, which killed off, oh, one-third of Europe’s entire population. Today, rats still carry the plague, which still infects people in the United States (although not hardly so rampant), as well as a gamut of other ugly diseases. They’re also a danger to your home, since they can “chew through electrical wires and start fires,” says Harrison.

Your best scare tactic: A rat can squeeze into your home through a hole as small as a half-dollar, so fill any gaps with steel wool. If you’ve already got a rat infestation, set traps with a pea-sized amount of peanut butter, then position with the bait-end side next to a wall, where rats tend to travel.

There’s a reason spotting these insects in your home makes your skin crawl: If you see one roach, “There are usually many more that you’re notseeing,” says Harrison. Hundreds more, thousands even. These critters can survive without food for a month, and without a head for aweek. And with all the diseases they carry—including E. coli, salmonella, and staphylococcus—they suck the health right out of you.

Your best scare tactic: You’ve heard it before, but it bears repeating: Keep a clean house and regularly take out your trash. But you should also take protective measures outside your home as well.

Since roaches love wet, dark places to breed, keep bushes and plants trimmed at least a foot away from your home, to allow for more airflow around your foundation. And before you reach for a cheap over-the-counter roach spray, consider yourself warned: These products usually can’t wipe out cockroach eggs, so you’ll need to get roach traps too or hire an exterminator.

Bedbugs are true vampires: During the night, they crawl out of the nooks and crannies of your mattress, dig their needle-sized beaks into your skin, and feast on your blood. Plus, they’re notoriously tough to purge from your home.

Your best scare tactic: Since bedbugs are master hitchhikers that can follow you home from even the swankiest hotel, store your luggage in your attic or garage—not next to your bed. If you suspect you’ve got bedbugs—as evidenced by welts on your body—check your mattress for insects the size of apple seeds. If you find any, don’t mess around, advises Harrison. You need professional help not only to get rid of the bedbugs can you see, but the larvae that have yet to mature.

Spotting these eight-legged creatures inside your home should freak you out, even if you don’t have arachnophobia. Many spiders can bite—and their venom can be lethal (hello, black widow). Even creepier, spiders can even take over a whole town, as they did to North Memphis, TN, back in 2015.

Your best scare tactic: Make sure your windows and door sweep are sealed, and caulk up any cracks that make good entry points for arachnids. Spray a few drops of peppermint oil mixed with water on windowsills, to deter other spiders from coming inside. To vacate anything that is lurking around now, vacuum your entire house, especially in dark corners and under furniture, then promptly dispose of the bag outside your home. Locating and getting rid of any other bugs in your home—which spiders feed on—will also help.

Think these teeny bugs aren’t all that scary? On the contrary, they should make a homeowner feel very, very afraid. “Termites are the No. 1 destroyer of property,” says Harrison. Unlike other insects on this list, they can literally devour your home, making the wood structure so unstable you’ll have to vacate the premises. Each year, these devilish insects cause about $5 billion worth of damage nationwide—which most insurance companies won’t cover unless you have specifically bought termite insurance.

Your best scare tactic: Storing firewood away from your home will help keep termites at bay. But keep this in mind: “In some parts of the country, the question isn’t whose house termites will go after, but when,” says Harrison. (Alaska’s the only U.S. state that’s termite-free.) Termites dig warmer climates, so if you live in the South, Southeast, Southwest, and West, it may be well worth your while to get termite insurance.