7 Natural Disasters That Can Destroy Your HomeAre You Covered 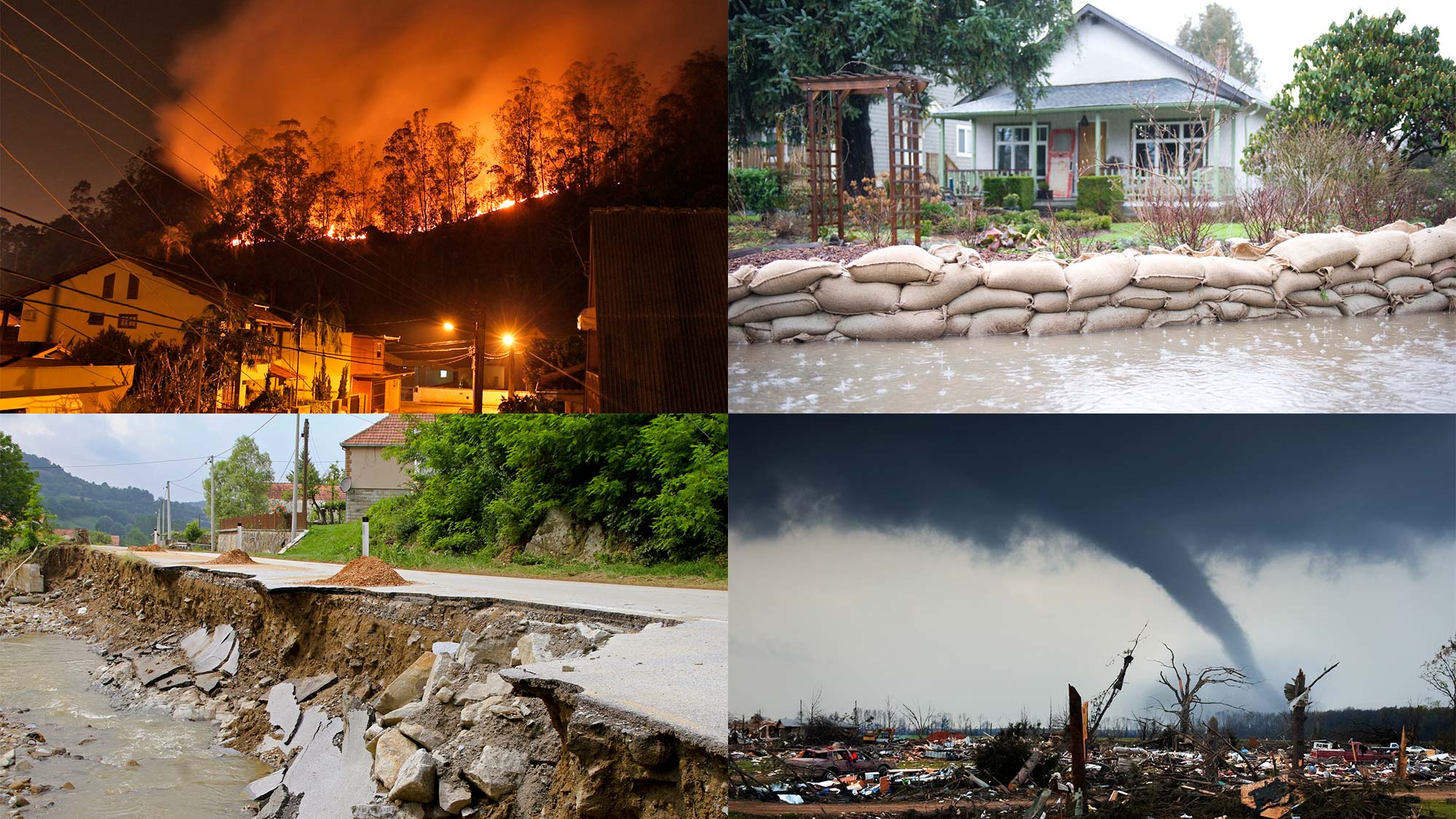 Maybe, just maybe, you prioritized your life so you could move your family and all your worldly possessions—lock, stock, and beagle(s)—to a region of the U.S. almostguaranteed to deliver 295 days of sunshine a year. Sweet! But here’s the not-so-sweet reality: All it takes is a few hours of cloudy skies along with a diabolical mix of hot and cold air to spell disaster for your home. And while you may be more familiar with traditional disasters like hurricanes, you may not be prepared for the earth opening up below your foundation or a wave of flames encircling your home.

Having financial safeguards against natural disasters can mean the difference between temporary displacement and outright bankruptcy.

So whether you’re a new homeowner, shopping for extra insurance, or contemplating whether you should renew your insurance after you’ve finally paid off your mortgage (spoiler: You should, even if you no longer have a lender requiring it), you need to be prepared in case Mother Nature loses her temper.

Here’s what you need to know about insurance coverage and how it pertains to seven natural disasters—including a few you might not have even thought about.

While coastal towns and cities are used to raging wind and water coming in from the sea, other areas can be caught by surprise—as we learned with Superstorm Sandy. The good news? Excessive wind damage is covered by standard homeowners insurance. That includes a tree branch coming through the window or bits of your roof flying away.

But there are some limitations.

“You can’t just leave the windows blown out and go about your business,” explains KevinLynch, an insurance professor at the American College of Financial Services in Pennsylvania who previously owned an insurance agency in Texas.

“You have to do something to stop the damage from getting worse,” he says. “If you don’t do that, then an insurance company could be in the position to not honor the entire loss.”

Of course, to prevent any confusion, you should always call your insurance agent as soon as the initial damage happens.

Usually, the ground you’re walking on isn’t going to open up. But in some places, it does. That’s why sinkhole insurance is state-specific—and in certain areas, it’s a very wise move. It’s also extra coverage you need to buy. However, any major service provider will offer it if you live in an area where the earth is known to cave in, such as Florida and Missouri.

Your standard homeowners insurance doesn’t cover any damages related to earth movement, which means earthquakes and landslides of mud, rain runoff, and melting snow. However, most major insurance providers will provide coverage by either a policy endorsement or a separate policy.

“Get your quality homeowners insurance from a name-brand company, then look and see what endorsements are made available,” Lynch says. Speak to your insurance agent to figure out which endorsements your provider has.

Most fires start within the home —but what about a raging inferno creeping toward your homestead? If you have homeowners insurance, you’re pretty much covered for all fires. As Lynch puts it: “A fire is a fire is a fire.”

However, if you’re worried about a catastrophic event, such as a wildfire turning your home into a pile of ashes, you’ll want to add extra coverage—such as for personal property. This type of policy expands your traditional homeowners insurance to cover expensive items such as valuable collections and jewelry. If you’re unsure whether or not Grandma’s Fabergé egg is covered, give your insurance agent a ring and do a rundown of all the valuables in your home to see what you need for full protection coverage.

The two-tier system has two deductibles. One is for the structure, and the other is for the roof. The roof will often have the higher deductible (because it’s more likely to be damaged in inclement weather), which could be 1% to 2% of the home’s worth. For example, the structure (everything but the roof) might have a $500 deductible. But if the roof has a 2% deductible and your home is worth $500,000, that means you’ll have an out-of-pocket deductible cost of up to $10,000.

As a general rule, you should take out as much insurance as you think you need and—just as important—as much as makes you feel safe. That could mean paying more, and that’s not always a bad thing in the end.

“Far too many people want to know the cheapest way to get by. But you’re never going to be happy about having cheap insurance the day after the big storm,” Lynch warns.

So what’s the best way to get the right insurance and know all the prices, coverages, and options? Talk to an insurance agent from a trusted company. We know, you’ve heard that before. But we mean it.

“That’s what they’re paying them for,” Lynch says. “The education necessary to purchase the right insurance.”