Obama 3000 Beautiful Lives Lost On 911 Will Not Be Forgotten

President Obama delivered remarks outside the Pentagon, to memorialize the 15th anniversary of the Sept. 11 terrorist attacks, telling gatherers that the "3,000 beautiful lives" lost that day will never be forgotten.

"We wonder how their lives might have unfolded -- how their dreams might have taken shape," Obama said during his last time overseeing an anniversary of Sept. 11 as president.

To the survivors of 9/11 and the families of victims, Obama said: "Even as you've mourned, you've summoned the strength to carry on."

"You've done your best to be a good neighbor, and a good friend, and a good citizen," he added. "You remind us there's nothing that Americans can't overcome."

Obama said that 15 years after the attacks, the threat of terrorism has evolved. The president then mentioned the "unspeakable violence" that has occurred in Boston, San Bernardino and Orlando. Groups like ISIS know "they'll never be able to defeat a nation as strong as America," so they hope to spark fear and change the way Americans live, the president said.

After his speech, "America the Beautiful" was played on wind instruments.

Prior to the ceremony at the Pentagon, Obama privately observed a moment of silence inside the White House residence to mark the occasion, as flags across the nation fly at half-staff in remembrance of the victims of 9/11.

Defense Secretary Ash Carter and Chairman of the Joint Chiefs of Staff Gen. Joseph Dunford attended the ceremony at the Pentagon, where more than 180 people were killed after al-Qaeda terrorists crashed a jetliner into the building during the string of attacks. 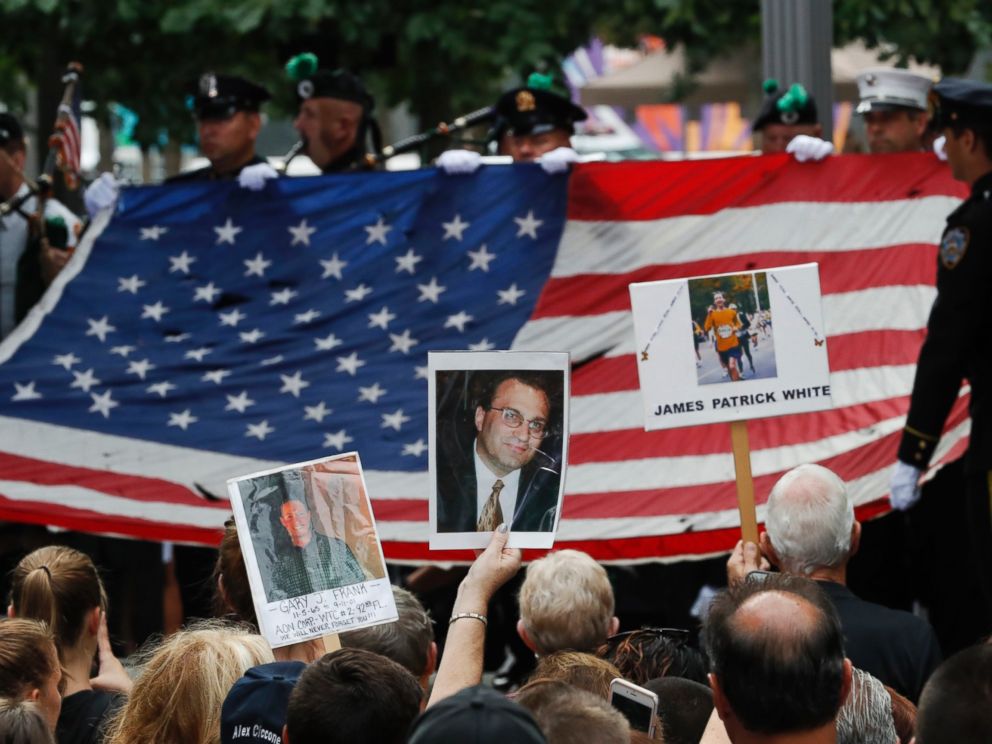 In New York, victims' relatives and others convened Sunday on the memorial plaza for one of the constants in how America remembers 9/11 after 15 years -- the anniversary ceremony itself.

Organizers planned some additional music and readings to mark the milestone year. But they kept close to what are now traditions: moments of silence and tolling bells, an apolitical atmosphere and the hours-long reading of the names of the dead.

Ground Zero has become a rebuilt World Trade Center, a place forever marked but greatly changed since Sept. 11, 2001. The nation around it is different, too.

But on this Sept. 11 itself, "bringing the focus back to why we did all this -- which is to honor those that were lost -- is something very intentional."

The simple, reverential observance may be the norm now, but city officials fielded about 4,500 suggestions -- including a Broadway parade honoring rescue workers and a one-minute blackout of all of Manhattan -- while planning the first ceremony in 2002.

Former president Bill Clinton tweeted that "defeating terrorism and embracing our common humanity" is the "best" way to honor the lives lost.

The 15th anniversary arrives in a country caught up in a combustible political campaign and keenly focused on political, economic and social fissures.

But the nation tries to put partisan politics on hold on the anniversary. Democratic presidential candidate Hillary Clinton and Republican rival Donald Trump attended the anniversary ceremony at the World Trade Center. Neither candidate is expected to make public remarks. Politicians may attend, but haven't been allowed to read names or deliver remarks since 2011. Clinton and Trump are following a custom of halting television ads that day.

Hundreds of people also are expected at a ceremony at the Flight 93 National Memorial in Shanksville.

Financial and other hurdles delayed the redevelopment of the Trade Center site early on, but now the 9/11 museum, three of four currently planned skyscrapers, an architecturally progressive transportation hub and shopping concourse and other features stand at the site. A design for a long-stalled, $250 million performing arts center was unveiled Thursday.

Around the World Trade Center, lower Manhattan now has dozens of new hotels and eateries, 60,000 more residents and ever-more visitors than before 9/11.

Meanwhile, the crowd has thinned somewhat at the anniversary ceremony in recent years, though over 1,000 survivors, recovery workers, victims' relatives and dignitaries attended last year. But there's been no sustained talk of curtailing the ceremony.

Organizers evaluate every year whether to make changes, Daniels said, "and every time the answer, thus far, has been it's so special for family members, and it's important for the nation."