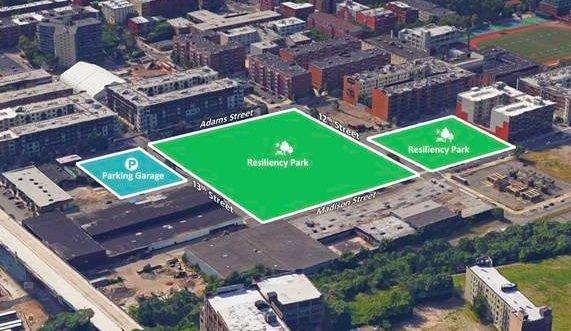 1/15 The City Council is scheduled to vote Wednesday, Oct. 5, on proposal by Mayor Dawn Zimmer to pay chemical giant BASF $30 million for 6.1 acres of property that would be developed into Northwest Park, which would sit atop a storm water detention system to alleviate flooding. Steve Strunsky | NJ Advance Media for NJ.comPrintEmail

HOBOKEN — The city has reached a tentative $30 million deal to buy 6.1 acres of land that would be turned into Hoboken's largest park.

The city council is expected to vote Wednesday on the proposal to pay chemical maker BASF for the land in the northwest section of Hoboken. A portion of the land would also be used to create an underground flood control system.

The total cost for the the 5.4-acre Northwest Park including construction could reach $50 million, according to Councilman Michael Russo, who represents the 3rd Ward. He said he plans to vote in support of the project.

The long-negotiated deal with BASF was announced Monday by Mayor Dawn Zimmer. Design work has not begun, but the proposal calls for recreational facilities, ball fields, playgrounds, and an above-ground garage on adjacent land.

Juan Melli, a spokesman for Zimmer, said the construction cost estimates wouldn't be available until after designs are complete and the land deal is finalized.

The stormwater detention system portion of the project would be capable of collecting a million gallons of water to handle storm surges, excessive rainfall and water main breaks. The system would pump the water into the Hudson River.

"While in the last 20 years, almost all of Hoboken's major new parks have been built along our waterfront, the western side of our city still has very little open space," Zimmer said in the announcement.

"Along with the southwest park under construction and the new park at 7th and Jackson to be built soon, I am extremely pleased that we are on track to create three new major resiliency parks in western Hoboken that will also help to alleviate flooding," Zimmer said.

The largest park currently in the city is Pier A, which is 4.8 acres. Hoboken mayor says new park could be done next summer

Southwest Park, at Observer Highway and Jackson Street, is intended to provide open space and drainage in a flood prone corner of the city transitioning from industrial to residential use

Roberto Nelson, a BASF spokesman, confirmed Tuesday that a deal had been reached.

On Wednesday, the council is scheduled to vote on the purchase agreement, as well as authorization of a $3 million down payment to BASF. The council is also set to vote on two bond ordinances totaling $22.15 million, which would supplement a prior bond issue approved for the project last year.

On Thursday night, residents, business owners and others can weigh in on the proposal during a public hearing scheduled for 6 p.m. at the Multi Service Center on Grand Street.

Officials said the council could give its final approval at its meeting on Oct. 19.

The park would be bounded by Adams and Madison streets to the east and west, and 13th and 12th streets north and south. A portion would stretch about half a block south of 12th Street between Madison and Jefferson streets.

Nelson, the BASF spokesman, said the property was a former manufacturing site vacant since 2004. Nelson said BASF had cleaned up contaminated soil and capped the site with asphalt, as required by federal environmental rules.

The city has been in talks to buy the property for several years, with the offers steadily increasing over time. The $30 million purchase price was revealed by the city in August.

That amount is more than triple the estimated cost of $9.7 million disclosed in 2015. That September, the council approved bonds to finance the acquisition. At one point, Hoboken had considered using eminent domain to acquire the land.